It’s the Superman family (sadly still missing Connor Kent and Linda Danvers) versus the Superman Revenge Squad and wow did they get their asses handed to them by the bad guys. In the end, they are all sent to the Phantom Zone and it looks like Zod may have killed Lois and Jon, although I suspect they were not in that ship he blew up despite what Superman thinks I am sure Lois came up with a plan and saved them both. I enjoyed this issue and I look forward to seeing them all try to escape the Phantom Zone and what Zod is up to exactly. 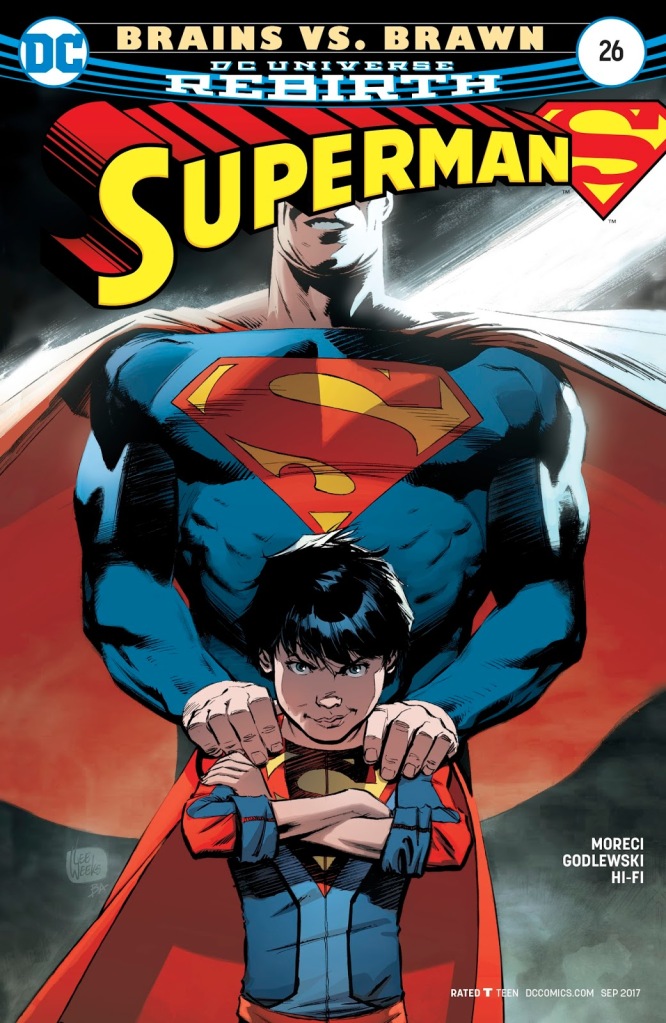 Ugh! How many fucking times do we have to see a moment between Pa Kent and young Clark and Pa teaching him how to work on the farm without his powers. IT HAS BEEN DONE HUNDRED THOUSAND TIMES. I am so sick of it. Jon Kent also comes off as a little prick in this comic. No need to read this if you haven’t already.

In this issue, Robin and Jon (I am not ready to call him Superboy yet, I miss Connor Kent) team up against Kid Amazo who is actually ultra powerful himelf. The thing that makes this issue good is the Robin and Jon’s constant bickering and insults back and forth. I love it. There is talk about Jon joining the Teen Titans even though he is not old enough. What if DC Just turned this book into the new Young Justice book and have a young justice team led by Damian and kept the Titans separate? I would like that.

Robin and Jon team up with Lex Luthor to defeat Kid Amazo in this issue. It was a lot of fun. I like that Damian seems to think it was a good team up even though he won’t admit it, whereas Jon hated it. Damian does actually care about Jon, he is just a hard ass.

END_OF_DOCUMENT_TOKEN_TO_BE_REPLACED 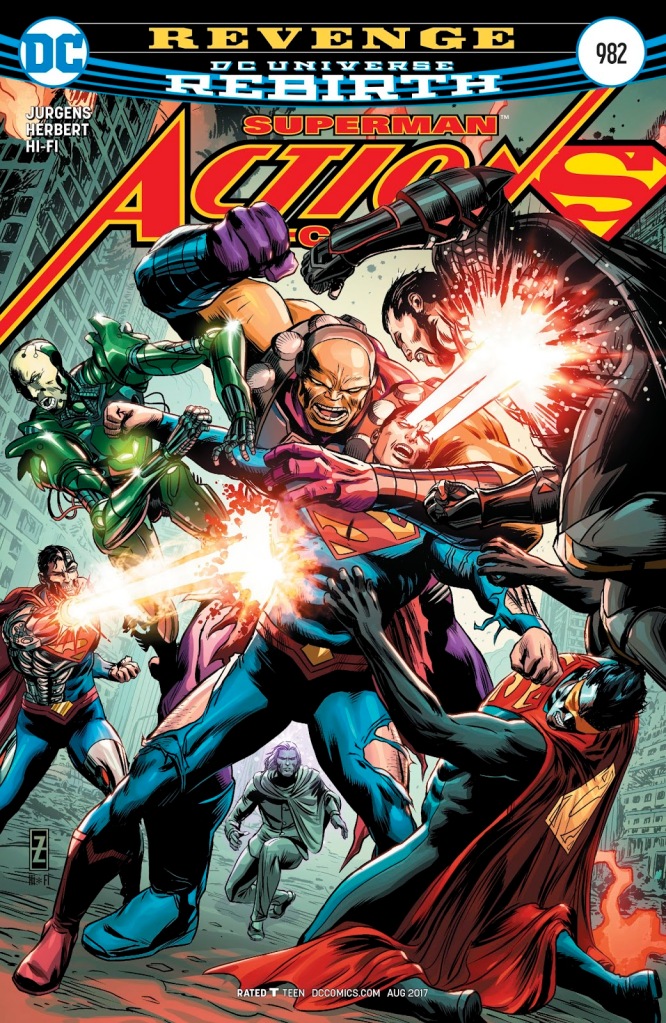 This was an okay issue. The Superman Revenge Squad comes after Superman at the fortress of solitude and nearly beats him to a pulp because he is blind from the last issue. Luckily it looks like the rest of the Superman family shows up on the final page to save him. Seeing that spread of these characters – I can’t help but miss Connor Kent and especially Linda Danvers. Sad.

This was an okay issue with some great moments. I love having Superman and Lois back as a married couple and I always knew Superman would be a good father but I don’t really find myself rooting for Jon Kent all that much yet and I do not know why. Is it because I miss Connor? Or is it because he is so young? I don’t know, although I know I am in the minority here. Maybe I will like him more when they move to Metropolis. 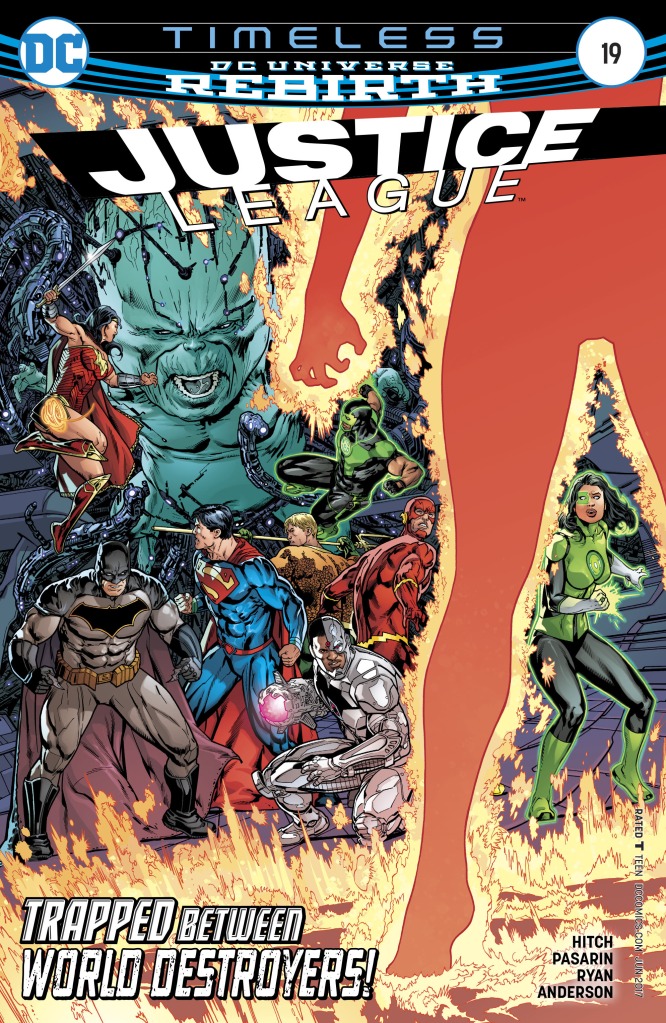 Molly the Keeper (whatever a Keeper is, they seem like monitors?) but she warns she only wanted to destroy the League because someone way worse is coming to destroy them. I am assuming this has something to do with Dr. Manhattan and Rebirth but maybe it is a different threat? I also have no clue who Alexis, Vincent, or Jane are. 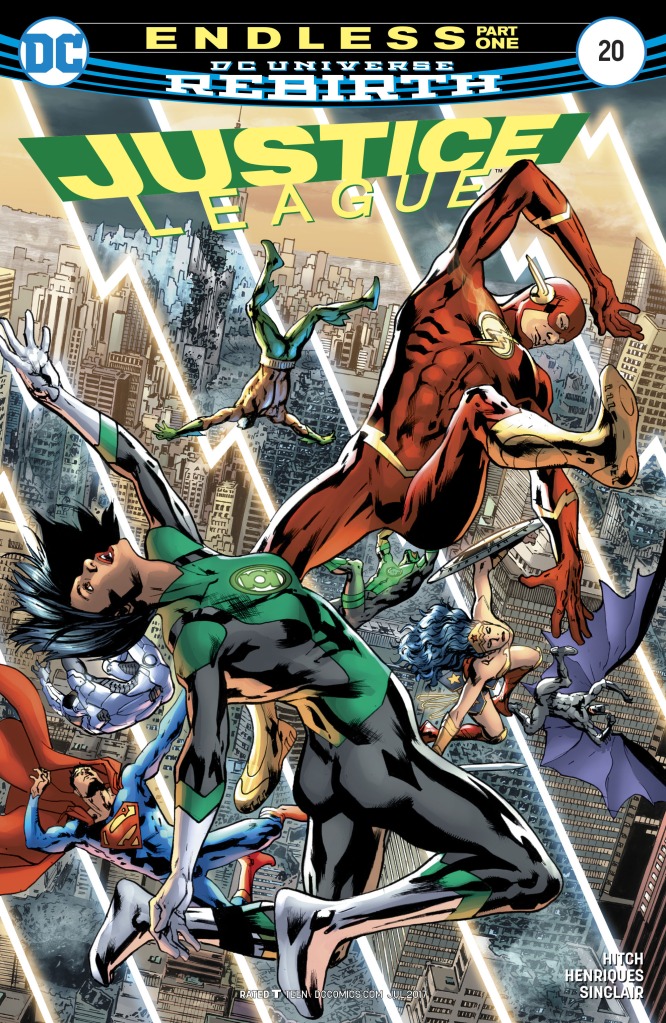 This was spectacularly depressing issue of Justice League where the Flash keeps reliving the death of Jessica Cruz like Groundhogs day and eventually figures out the guy who caused it’s family was accidentally killed by the machine he created when it mixed with the Speed Force and he blames the Justice League. This is the second time this book has had a villain who blames the League for deaths of loved ones but I am willing to see where this goes before I judge the story because it was enjoyable.

END_OF_DOCUMENT_TOKEN_TO_BE_REPLACED

This Jack Herbert seems like the perfect Superman artist. He draws the hero in such a beautiful way. I thought that Jurgens was showing us that the trio of the Eradicator, Cyborg Superman, and Zod are a force to be reckoned with in this issue but the final issue shows that something else has happened to Superman! And it is something I wonder will last for a while or will be fixed in one issue? I hope it gets explored well because I don’t remember this ever happening to Superman before this. This was a good issue of Action Comics.