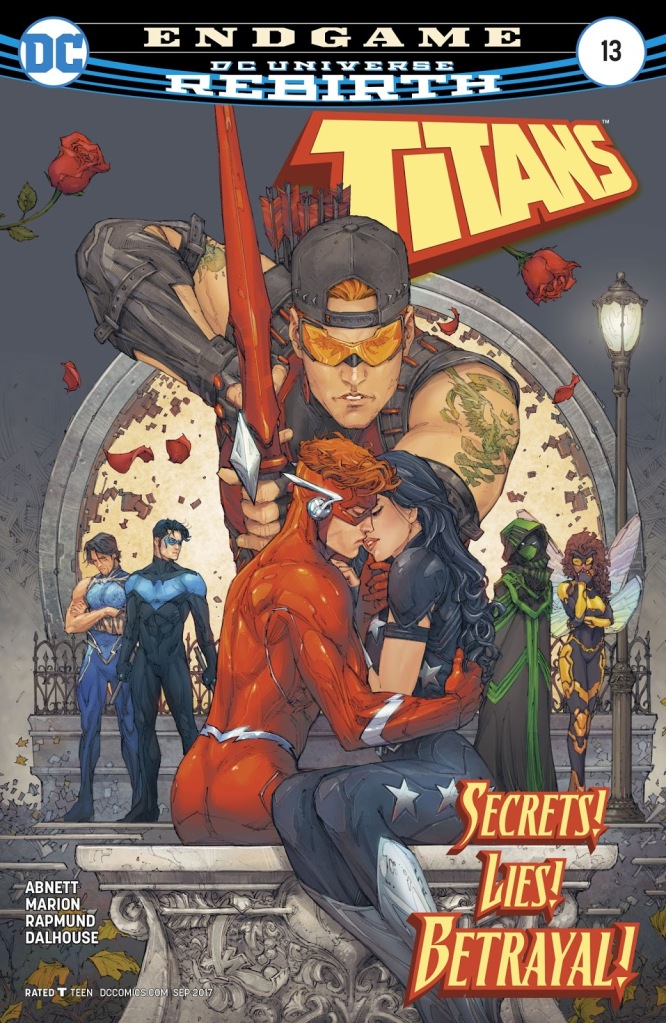 Okay this was a bare bones issue. Basically it is a big fight with the Titans and they are fighting this Mr. Binder who works for H.I.V.E. and the Flash is worried about his heart, Omen tells Tempest that someone is going to betray the team, and Donna is worried Roy will end up jealous about her new relationship with Wally. None of it seemed natural and I don’t know if it is the fault of the artist or Abnett. Speaking of Tempest, can we get his old costume back with the red and black? It just worked so much better than this current costume. I am actually not that interested in whoever betrays the team because I don’t buy any of these characters actually doing so except for maybe Bumblebee. 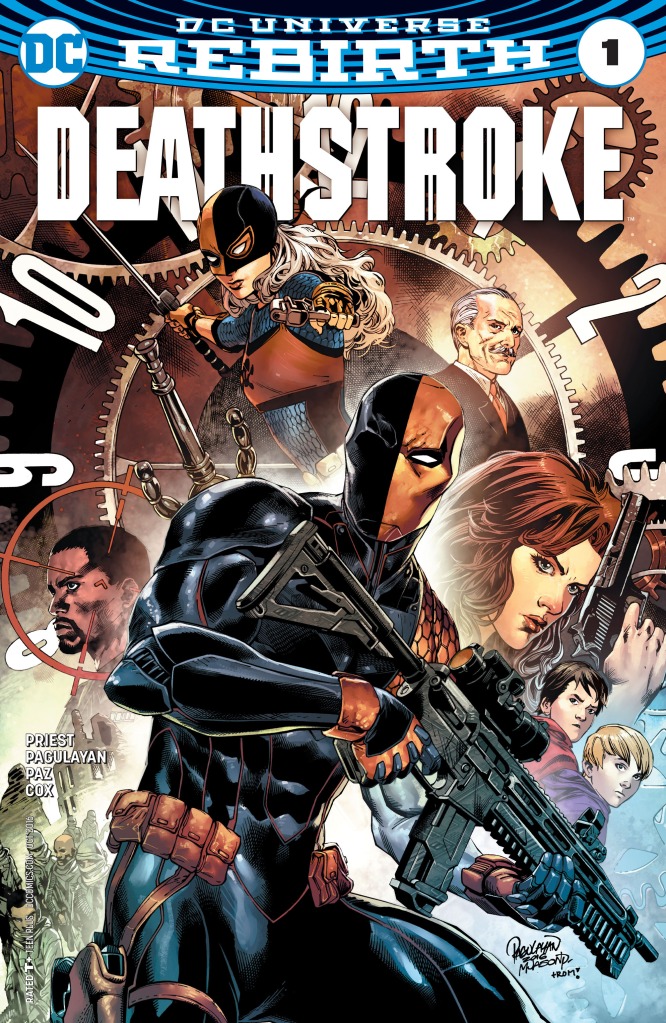 I only know Deathstroke from his appearance in other comic books (and I have to say he is way overused) and not his solos series, and for a #1 issue this really is not written for new readers. I was so lost, and I know the character. 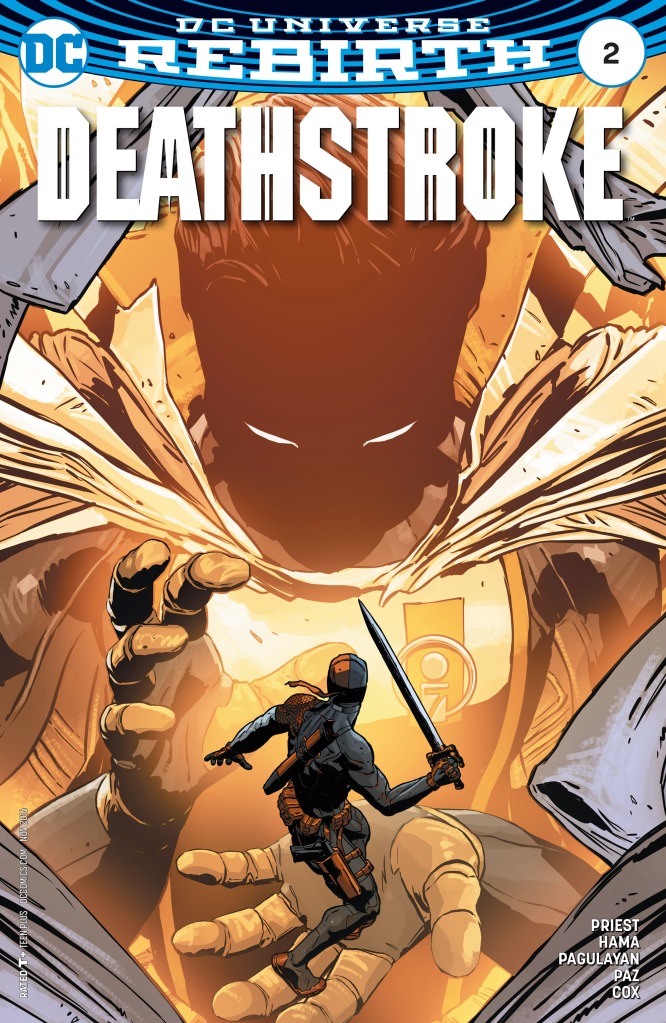 Okay I have always wondered why Rose Wilson had silver hair, I always assumed it had something to do with whatever the thing is that Deathstroke injects into himself but when he has injected others – like sadly Cassandra Cain for example – their hair does not turn white. (Maybe that is just because Cassandra is so badass she can take it without her hair turning white.) Anyways, I still found this issue hard to follow, but better than the last – at least I know Rose Wilson/the Ravager from her Titans days.

END_OF_DOCUMENT_TOKEN_TO_BE_REPLACED 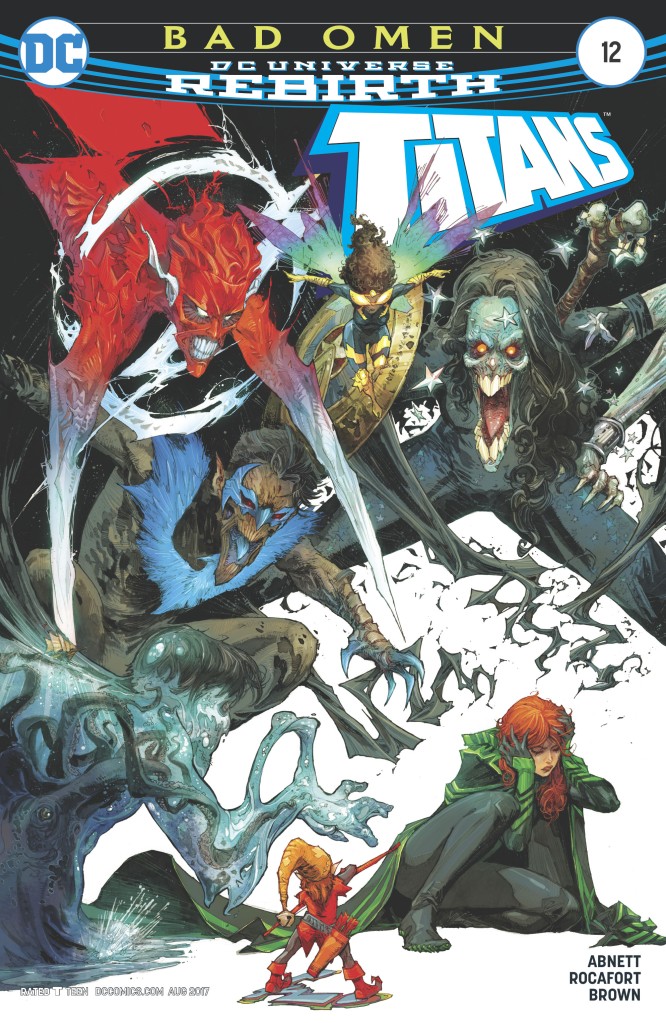 This was a very good issue of this series as we see the Titans through the eyes of Lilith Clay. First of all, Abnett portrays Lilith as even more powerful than I ever realized with her new fighting technique. She truly deserves to be on this team. We are also introduced to a romance between her and Tempest….something I never saw hinted at before. And another romance between Donna and Wally. I am not okay with the new status quo for both Donna and Wally but I am hoping this leads somewhere. I am very confused as to which of Donna’s memories are fake because she did serve on the Titans when she was younger. This issue also reveals that one of the Titans will betray the team….I have no idea who it is but I am betting it is actually Omen herself or Bumblebee or maybe someone who hasn’t joined yet. 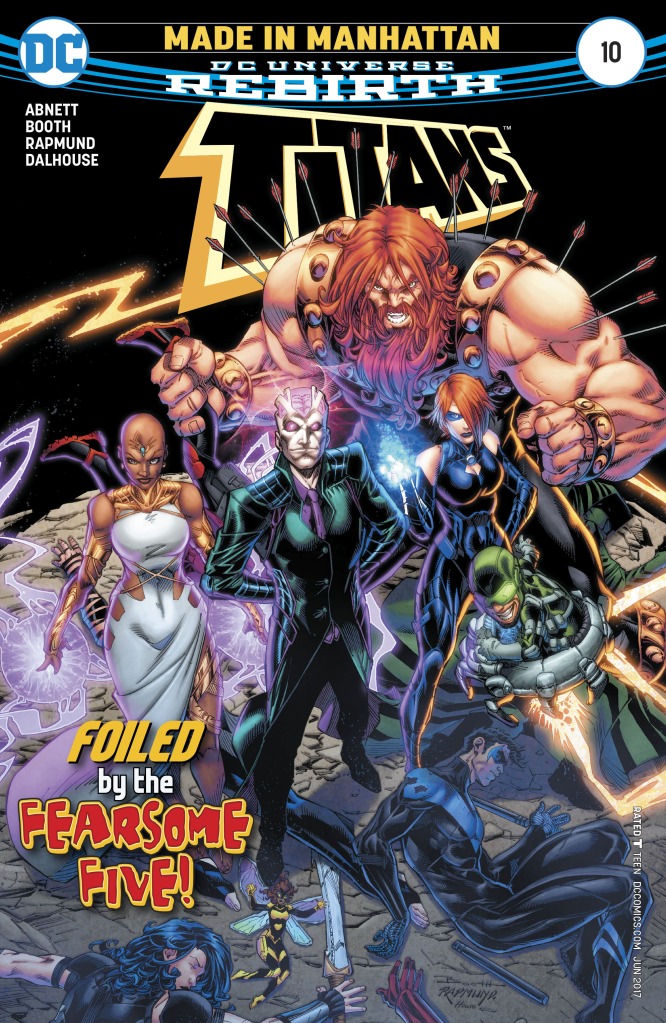 Ok Abnett why in the hell are you having the Titans call each other by real names right in front of the Fearsome Five! I can’t stand when writers do this. That being said this was a fun issue as the Titans face off against the Fearsome Five. Bumblebee, of all people, end up saving the day. I am very unclear what her powers are. In the end, she ends up having her memory of Mal Duncan erased which should make some drama in the future. Speaking of Mal, I like his new costume….I think. 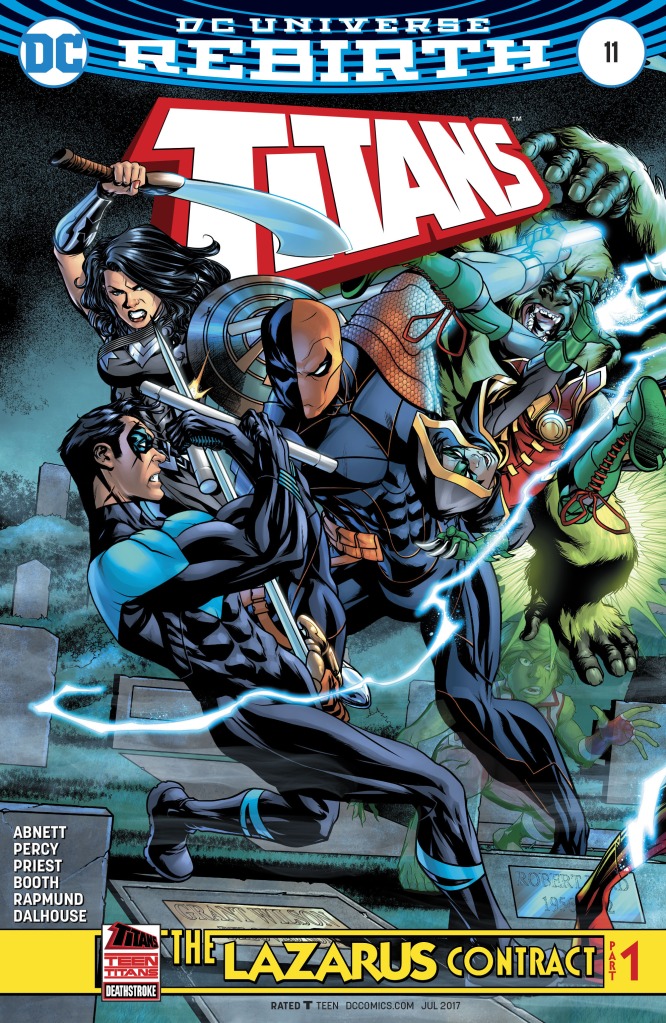 Wow as I suspected the events of the New Teen Titans series are now back in continuity! But they didn’t happen exactly as they did in the original series…I don’t remember Lilith being much in the comic at all and the costumes are different. This is an interesting take on things. In this continuity was Raven not in the New Teen Titans, but it was instead Lilith? I look forward to seeing where this goes. 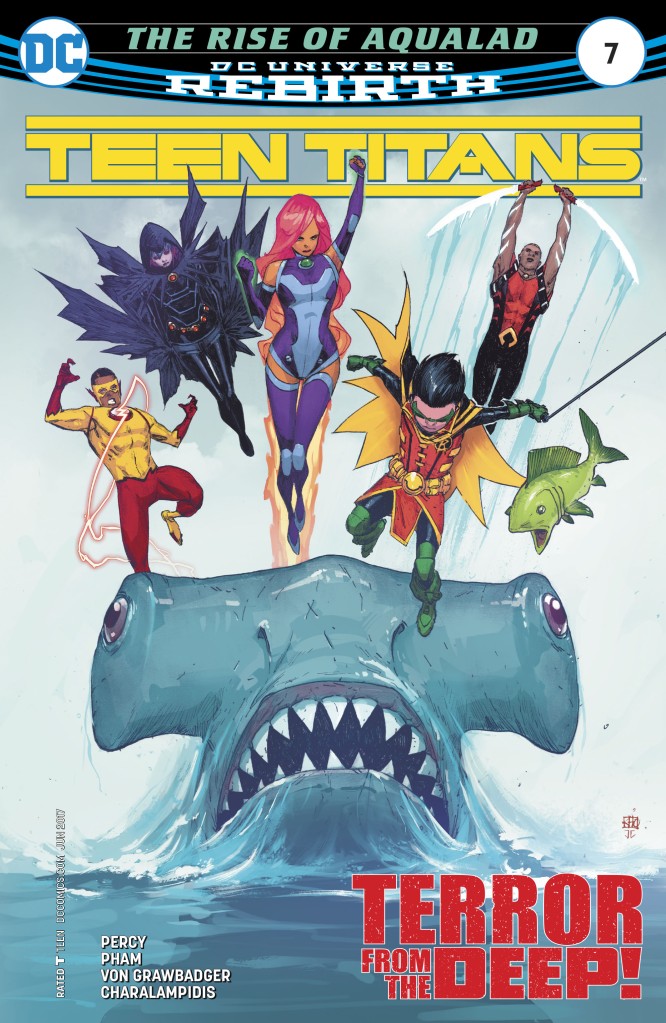 Jackson Hyde makes it to Titans Tower and is immediately rejected by Robin until he saves Robin from King Shark. Damian then gives him a suit that he had been creating for himself for underwater missions. I wonder if this will be Jackson’s final Aqualad costume – it is unclear because he never puts it on in this comic. I am hoping Jackson is given the name Aqualad by Garth as a passing of the torch in the upcoming crossover. 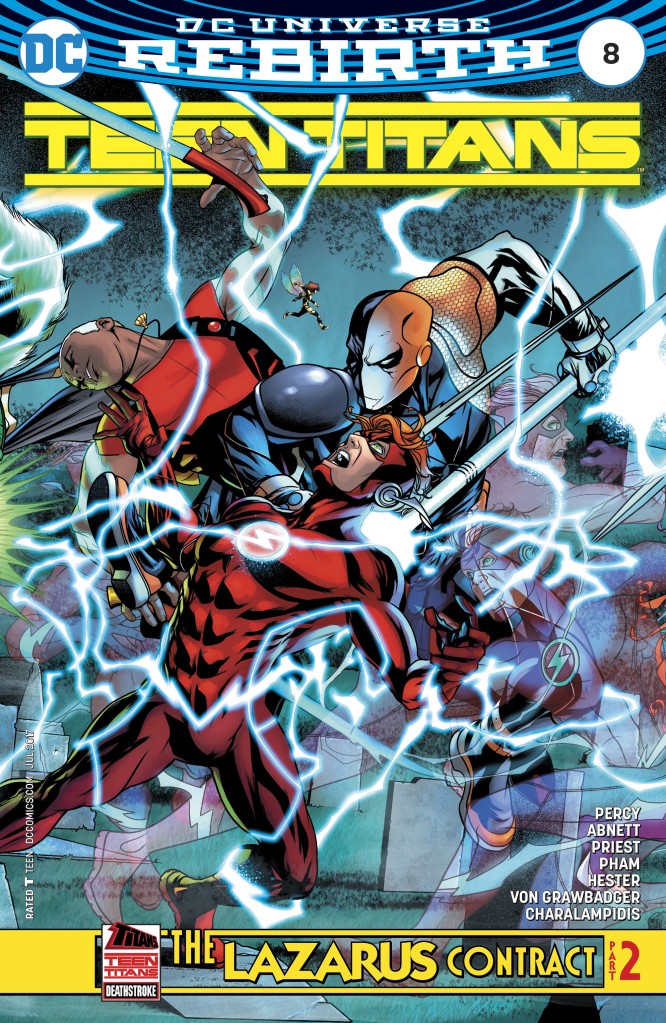 This is Part 2 of the Lazarus Contract crossover that began here. I want to dislike this crossover because I know that Deathstroke trying to ressurect Grant Wilson has been done SO MANY TIMES in the past. In fact, I think it was done right before Flashpoint. But the writing and characterization is top notch I can’t really hate it. Tempest and the new Aqualad meet for the first time, Donna and Starfire saying how they should really be the ones in charge – the writers clearly know these characters. Kid Flash actually finds out that Wally has the same name as him in this issue which I figured the would have left for the Flash books to resolve. 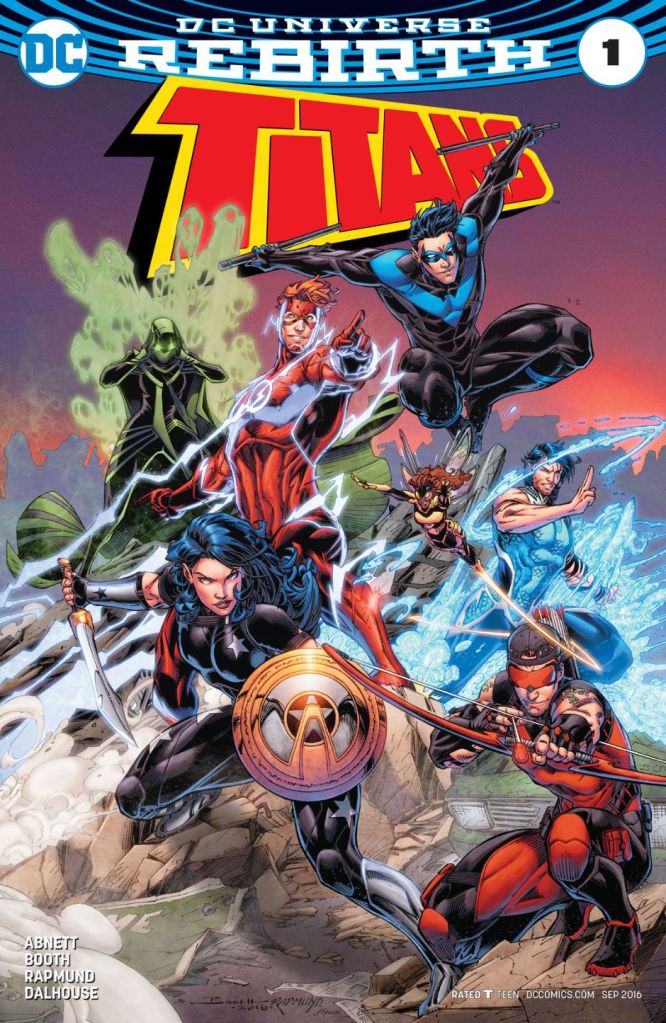 It is so strange when they flashback to the old Teen Titans days and Dick Grayson is shown to be wearing what is essentially the Time Drake Robin costume. I know that is a New 52 thing…but it is just dumb. DC should not be ashamed of their past, they should embrace it. It is strange that Wally skips over essentially everything post-crisis in the opening narraration except for Linda Park. What about Barry’s death and the birth of his kids? Out of all the new Titans costumes, I think I liked Donna Troy’s the best. I think she was do for a refresher. It really speaks to her past as Wonder Girl and her time as Troia. I am not a fan of Tempest or Garth’s (Is he still called Tempest?), I think his Pre-Flashpoint costume was better. It was so great to see this team back together and for their history to be restored. Now I would like to know if they eventually remember the Wolfman/Perez era and the rest of their history. Titans Together! Oh and unlike the other writers, Abnett seems to understand Wally West is Keystone City’s hero. I am glad we are finally getting to see Keystone again. 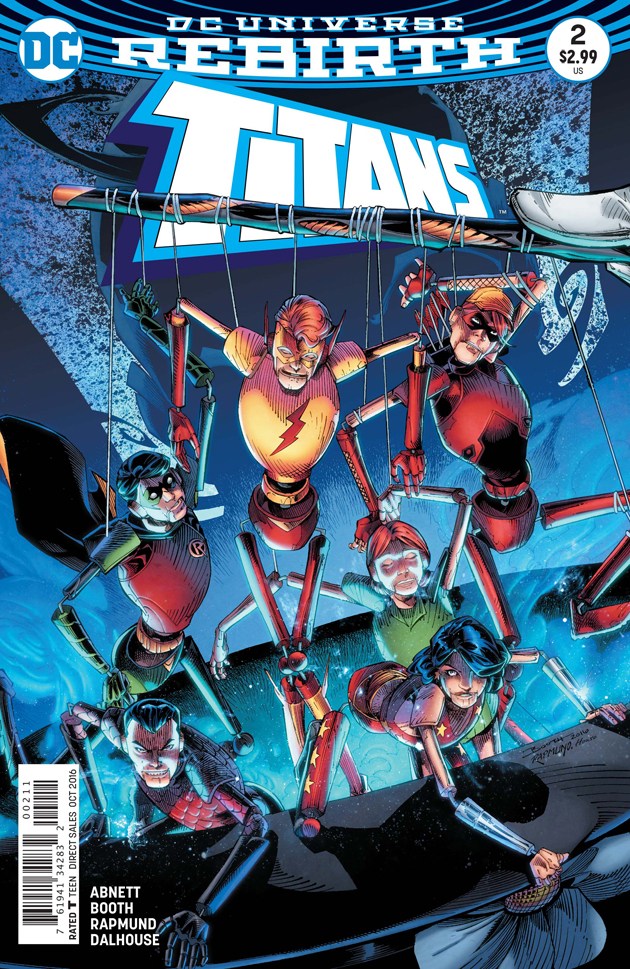 Okay I haven’t exactly enjoyed Abnett’s Aquaman run so I was not expecting much from this book other than hints at the big Rebirth mystery, and there are plenty of that. But I am genuinely enjoying this series in it’s second issue. Even though this whole issue was a big fight with the Titans and Abra Kadabra it still had great characterization and pacing. I was surprised. Abra Kadabra seems to know that Doctor Manhattan or whoever the big bad is that broke history. So that means him, Psycho Pyrate, Superman, Wally, and Lois all seem to know. Linda Park seems closer to meeting Wally again already. I like that. I hope they eventually remember their kids. Also, it looks like Abnett is hinting at bringing back the Donna and Roy romance.

END_OF_DOCUMENT_TOKEN_TO_BE_REPLACED 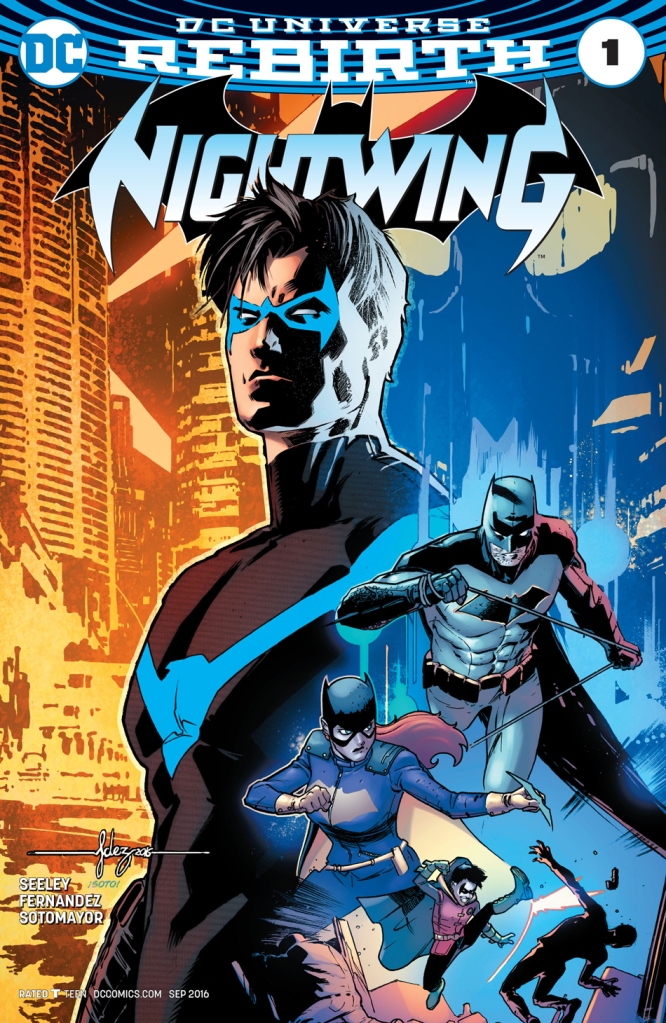 How great is it to see Nightwing in that costume again? It’s been what ten years since he wore that beautiful – frankly iconic – Nightwing costume. DC….what were you thinking? He should have been returned to that immediately after he stopped being Batman. Speaking of that, Dick refers to his time as Batman. Does that mean Final Crisis happened in the New 52 universe or is this a result of Rebirth restoring the timeline? Interesting. This was a great start to this series but not exactly a good jumping on point for new readers for a first issue. We aren’t really told what is going on with this Parliament of Owls other than they are forcing Dick to work with them or they think they are and he is playing them. I don’t know much about the Court of Owls because they are a new 52 creation. Anyways, it is still weird to see Barbara Gordon in a Batgirl costume and not Oracle and looking so young. Is she still suppose to be the same age as Dick?  So far…this is good. Seeley seems to really understand Dick Grayson as a character and the art is perfect for a Nightwing book. 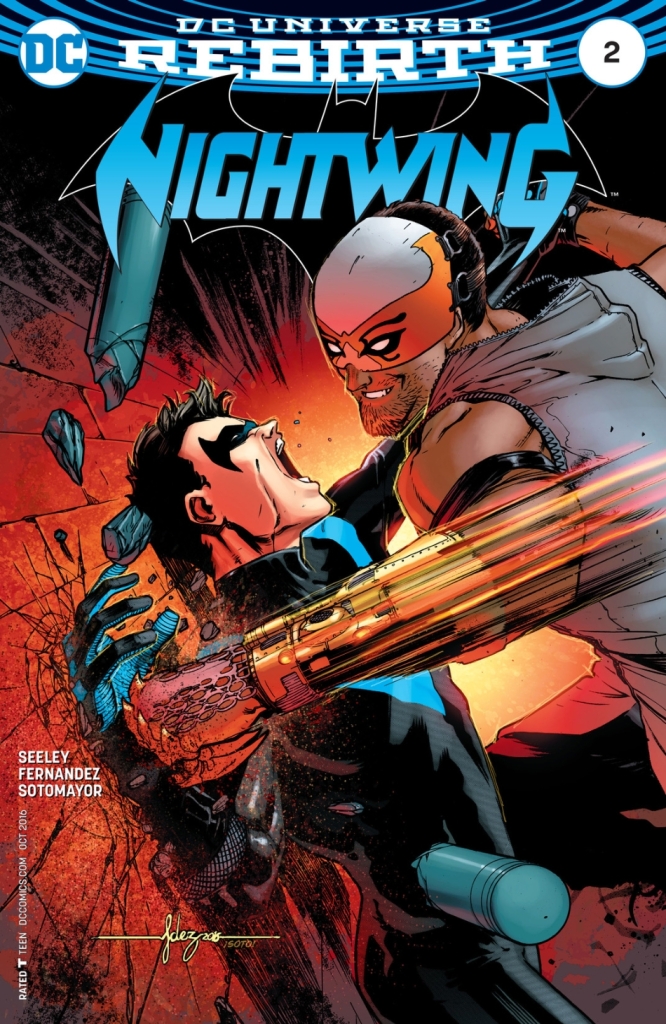 This was a fantastic comic. I like how Seeley writes Nightwing’s narraration. It isn’t all action, there is depth to this story. I don’t like how the Raptor knows their have been different Robins. That is dumb. The general public in the DCU should not know that. Also, how is Barbara flying to Tokyo and back? Does Bruce bankroll her?