Keith Giffen joins Didio in this issue of the Outsiders and it vastly improves the dialogue…I would assume…I did not go back and re-read the previous issues but I do remember horrible dialogue. What is clear about Didio is he and I both have a common interest in the history of this team. If Didio loves these obscure characters and brings them back for his run, why can’t he understand the love for characters like Cassandra Cain, Linda Danvers, Kyle Rayner, and Wally West?! But I digress, this was actually a cool issue as we see the return of a lot of former Outsiders as they battle it out in Markovia. Hell, even Technocrat shows up. I loved it. I hate to say that, but Didio and Giffren did a good job here. 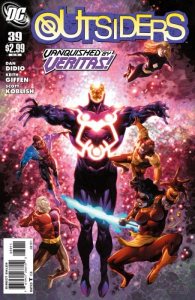 The big villain manupulating things behind the scenes is revealed to be Veritas whose motivations are not explained and Geo-Force becomes one with the land of Markovia erecting huge walls of earth around the country’s borders for some reason. It was not as good as the last issue and left me very confused. It looks like Batman will be showing up for the final issue though.

This is the final issue of this series and truly a finale to the Outsiders’s long history in the DC Universe which is beautifully recapped in the pages of this comic. One day I want to go through this again and see if every Outsider appears in the flashbacks because it sure seems like they covered it all! I am actually very proud of Didio for this. I know I can’t stand the decisions he has made as head of DC but he sure does love the Outsiders. So why in the hell did he restart the continuity of the DC Universe with the new 52 if he loves the Outsiders so much! Geo-Force is left here a broken person and it is sad we will probably never see this resolved. I actually even liked Tan’s art in this. We even get to see him draw Cassandra Cain in a flashback! Didio included Cassandra in a book he wrote! Or…I bet it was Tan. 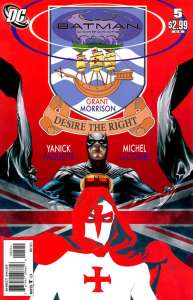 In this issue we are introduced to “The Hood” who I immediately mistook for being Azrael at first and Batwing who is the Batman of Africa. I did not realize it but Bruce and Kate aka Batman and Batwoman had never met before this issue. At least since Kate has become Batwoman. How did I not notice that? Paquette draws a great Batwoman. Anyways, like usual Morrison’s story doesn’t make sense until the very end when the clues will come together. We still don’t know what Doctor Dedalus’s plan is or what exactly Leviathan is but there a ton of interesting clues in this issue. Can’t wait to see where this goes! 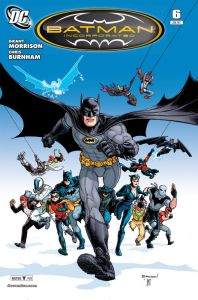 Wow Grant Morrison is amazing! Of course the Outsiders would be part of Batman Incorporated! Anyways I loved this issue up until Bruce Wayne tells a group that includes pretty much everyone he cares about that they are his closest associates except Cassandra Cain is not there! But then a few pages later my dreams came true! Cassandra Cain was back with a new identity! She is now the Black Bat – the Batman of Hong Kong! Seriously this is the best thing Grant Morrison has ever wrote. I love the character so much and to see her back in action is incredible. I definitely prefer the Black Bat costume over her present Orphan costume. I sincerely hope Rebirth ends up having Cassandra remember her time as Batgirl and as Black Bat and retaking up the mantle of the bat where she belongs. The best thing about this is it redeems Bryan Q. Miller having Cassandra leave Gotham because Morrison is writing Batman here as trusting Cassandra enough to be her own Batwoman of Hong Kong. She is not a sidekick. She is an equal to him. And that is how it should be. Best issue of this series hands down. 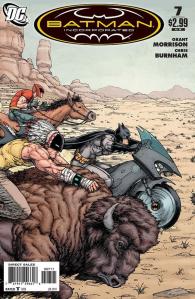 This issue focused on Man-of-Bats and his sidekick Little Raven and I expected it to be dull as shit but I was pleasantly blown away. First of all, Burnham’s art is gorgeous. Second of all, Morrison wrote a really inspiring story about a hero standing up for his community on a low budget. It was really good. 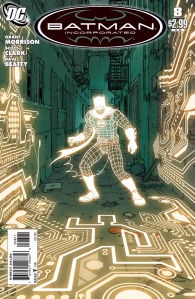 This issue is one of those brilliant Duh comic books that you think wow that’s genius but why hasn’t somebody already of that. There is no reason why this couldn’t be a whole series of virtual Barbara Gordon fighting. We didn’t need to stop her from being Oracle to see her in action. This issue even makes more sense today with virtual reality. I say make Cassandra Cain a bat again and put Barbara back as Oracle and if you need to have her in action use this virtual reality. Anyways, we learn Jezebel Jet is behind Leviathan which I didn’t see coming at all. 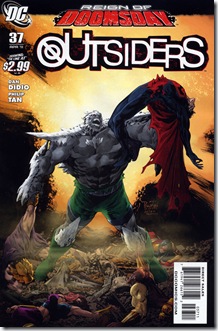 This is the second part of the Reign of Doomsday storyline that began in the Steel One-Shot. It was okay. Didio’s dialogue is of course horrible and everything, but Tan’s art has improved tremendously even if I did not know what was going on with the fight half the time. It looks like Eradicator is dead but I doubt it. At least we get to see Halo back in action.

Okay so in interviews Giffen said he was taking over art but that doesn’t seem to be so. Dan Didio is supposed to be the co-publisher of DC Comics – how does this guy have this job if he can’t even keep an artist on his own book? And wow is Black Lightning a dick to Thunder in this. The dialogue is still pathetically bad here but at least we get a reason for Geo-Force’s madness and it was great to see Thunder and Grace again (Even if Bennett decided to have her be in a thong the whole issue!)

Roberson introduce (or re-introduces for some) to the DC Universe of the 853rd Century and I am one of the few who have never read DC One Million and therefore I am fascinated by this Justice Legion with its many worlds and I can’t wait to see more next issue. Epoch Lord of Time doesn’t seem like a new character but I could be wrong but he was a great way to frame the story and allow for the past and the future to collide.

Epoch is stopped by the Bronze Age World’s Finest and travels through time being defeated by each era’s Batman and Superman – Brilliant! I am looking forward to seeing more of Roberson’s run on the main Super-book after reading this awesomeness. 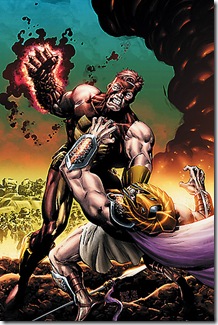 I like the idea of The Olympian getting involved with the Outsiders – but I don’t know how I feel about him actually calling his men Manazons. That is just dumb. I think we know why that Wonder Woman arc was called Rise of the Olympian despite its focus being on Genocide – Didio. He loves this character I guess. It is great to see Giffen joining the book as artist and co-plotter as it will probably gain some quality. 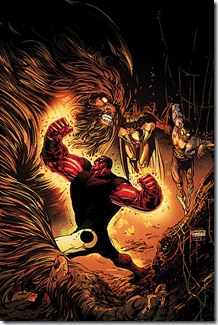 Ahh and Tan comes back for one more issue! He is not such a bad artist but he never draws backgrounds and I never know what the hell is going on when he draws this comic. Not to mention the dialogue is pathetically bad once again. Ugh at least Giffen is coming back next issue. Oh and since when does Black Lightning contain Black Lantern energy??

Um….can we just have the team back again? Why is this filled with shitty dialogue and no movement in plot months after months? How is it that a guy who writes a comic like this is DC’s co-publisher? This is embarassing. I love me some Outsiders but this book is not getting any better!