In the main story, Lamprey and Power Boy are put through a test and it seems like Cosmic Boy has decided they don’t have what it takes to join the Legion sadly. Jimenez’s art rocks and so does Levitz’s storytelling. In the backup Black Witch defeats Mordru although I can’t remember why she was fighting him to begin with. I really liked Borges’s art too.

I liked this issue much better. It was fun and easy to follow as the Legion Academy uses magic to remove the gene mod from a villain. Borges’s art is quite impressive and he seems to be a good storyteller. In the second story, Nigh Girl asks XS to help train the Legion Academy and in the process learn about Earth-Zero. I like that Levitz is following up on Final Crisis : Legion of 3 Worlds here. Levitz is a class act and a lover of continuity. XS declines the offer but is creating some kind of mosaic to honor her family and connects with the speed force having a vision of her running with Impulse and the Flash. Very cool! I have no idea where this is going but I like it.

In this issue, Comet Queen explains her origins as a Legion Fan girl who deliberately gained powers in order to join the Legion and be with her crush, Bouncing Boy. She eventually graduates from Legion Academy only to be told she is joining the Legion of Substitute Heroes. During her time with the subs, her mind is erased by Saturn Queen and although most of memory has returned there are some things still missing. It was a fun straight forward issue that I enjoyed a lot. Levitz seems to really enjoy writing this character and I enjoyed reading about her. 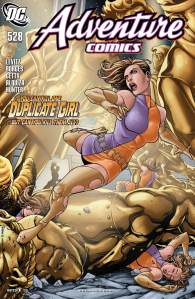 In this issue, Cosmic King breaks into Legion headquarters and quickly knocks out the only Legionnaires around at this time – Bouncing Boy, Duplicate Girl, and Night Girl. Therefore it looks like in the next issue the Legion Academy will have to take him on. I felt that the art was a little weak this issue but it was otherwise good. 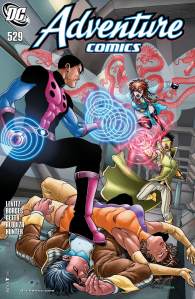 Sadly this is the final issue of Adventure Comics. DC brought this historical title back only to get it pushed away by the dumb New 52.  And sad this issue was. The Legion Academy defeats Cosmic King but only by losing one of their own – Variable Lad. Who I thought was one of the best of them! So sad. I am glad the Legion is back in the rebirth DCU and I hope we see more of these Legion Academy in the future. 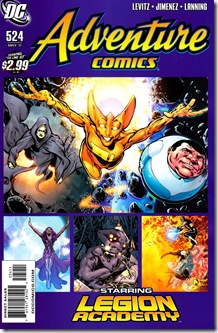 I liked the second issue of this book focusing on Legion Academy even better then the first. I would love to see Lamprey become a full-fledged Legionnaire – she is just too cool looking. I wonder if this is Chemical Kid’s mom who is the big bad? Speaking of Chemical Kid, he was way more likable in this issue.  I want to see more Variable Lad in action. Jimenez’s art is as beautiful as ever.