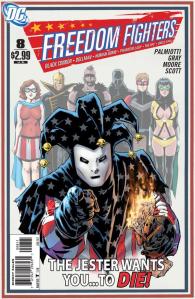 This book was just as beautifully drawn and written as  I remembered it being. I have been a huge fan of the Freedom Fighters since Palmiotti and Gray did their first miniseries with them. I am sad they aren’t around anymore because we could really use these characters during this awful period in US history. DC if you are reading this I would love to write a Freedom Fighters book for you! Anyways, in this issue the team mourns the loss of Firebrand while the President tells Uncle Sam and Miss America he is sadly going to have to cut any government funding to the superhero team. I love the statement Uncle Sam makes about Superman can’t just stand for the American Way in the modern world he stands for the whole human race. Who knew Palmiotti and Gray would get me to respect this character so much.

This is sadly the final issue of this short lived book that I loved! In this issue the team disbands after the government cuts their funding. We see Black Condor bust a meth lab (why did Travis Moore draw all the people in the lab as being in their underwear? Is that normal in Meth labs?) and the team go on one last adventure which at the end of the government takes the Human Bomb into custody. This is left on a cliffhanger. Was this ever resolved somewhere?

The Freedom Fighters leave the creepy villain gang to die in this issue… on the orders of Miss America who is acting pretty agressive here apparently forcing Doll Man to come out of retirement by gun point. This was a great opening arc for this title and I expect the next arc will be even better. Oh and Phantom Lady and Black Condor hook up!

Holy shit! This was an awesome comic! The Freedom Fighters are trapped in Enclave A with the creepiest metahuman prisoners I have ever read in a comic (One is made out of dead babies or something) and you really get the feeling of being trapped while reading this – even as you start to sympathize with the prisoners who it looks like were all brought here and tortured against their will. All the while still dealing with the overall arc of a secret weapon belonging to the Confederacy. I will say it again, everyone should be reading this book! It’s that good! 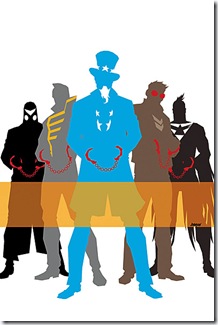 Palmiotti and Gray flesh out the back story of the Jester – making him far more interesting then the character ever was in the Golden Age and also introduce a crop of new villains like the disgusting Funerella who’s kisses kill people by having their flesh rot or something like that. In other words, this is still definitely the best new book of the year THAT EVERYONE SHOULD BE READING. It has conspiracy theory, intrigue, tons of action, and characterization. It is everything you could want in a comic.