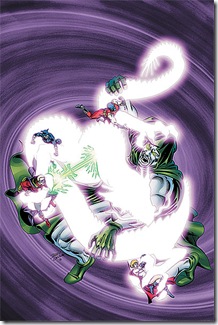 I liked this part much better then the first part of this little fill-in arc. Maybe cause I find Japanese Mythology quite interesting and Ordway used it quite nicely in this. Atom Smasher and Stargirl’s relationship is a little strange. How old is he supposed to be? I also liked that Ordway avoided saying that the bomb being dropped was inevitable and couldn’t be avoided and all the usual right-wing propaganda about Hiroshima. We did a shitty thing people, let’s admit that and move on. But anyways, this was an enjoyable issue but I am looking forward to seeing how everything goes when the new creative team takes over next issue.

Mon-El spends this issue traveling the globe and meeting up with heroes and villains from all different countries. Each of these tales could have had their own issue or two but something about him summarizing it made everything a lot more exciting and less decompressed in the way most comics are. Robinson really takes advantage of writing in the DC Universe in a way that most writers don’t. That is what makes him one of the best writers that DC has right now. He utilizes his playground to the max. It was a lot of fun to see the different heroes internationally (some old and some new) and to cap it off, it looks like Steel is in trouble. Sam Lane is such a douchebag for wanting to kill Steel.

I have to say this was kind of a disappointing conclusion. I mean the art was a bit better probably because of Barrows, but I felt it concluded rather quickly, probably in order to get to Blackest Night faster. The Douche Hal Jordan grows his hands back even! I just think the entire issue was rather forgettable. I sure hope Larfreeze won’t hurt the Blue Lanterns, I love them!

Okay for some reason DC’s solicitations were wrong on their website and this is McDuffie’s last issue on this book. Well at least he gets to finish his story arc. I actually liked this conclusion. Sure the art is still not great for a book like Justice League, but it was competent. I enjoyed the explanation for how the Milestone Universe and DC Universe merged. I think it was really the easiest way to explain it. Although I was under the impression they were not going to explain it, I am glad they did (Although it doesn’t make sense that Superman would be wearing his Superman outfit on New Krypton). I hope when the new creative team takes over they won’t get rid of Firestorm, I think it is great to see him on this team and I am hoping Icon will still be joining even though McDuffie is not on the book anymore.

Okay fuck all the haters on this series, because it was AMAZING! This first issue really hit it out of the park for me. Three of my favorite Bat-villains working together is good enough, but the fact that they will be working out of an abandoned animal shelter brought to them by some Criminal Broker aptly named the Broker makes it even better! This is going to be a fun book, and will hopefully remind me of the Batman: The Animated Series days. Seriously, the Bat villains are the most underused characters in terms of their popularity and I can’t wait to see them spotlighted here. If only we could have seen Harley in costume! Oh and here is my guess, Catwoman is going to tell Ivy she doesn’t know who Batman is because she doesn’t actually know who the NEW Batman is. 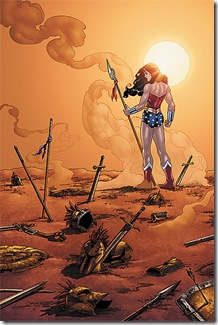 The Rise of the Olypian comes to an end in this issue when Achilles takes over leadership of the Amazons and Wonder Woman rejects Zeus and says goodbye to her mother. I really enjoyed it and it was the perfect ending in that it was a true ending but left it open ended for Genocide’s eventual return. I think Simone has created a great new villain for Diana. I also like that Diana is not as loyal to the Gods as her mother is, probably because since she has lived so long in America she has taken on American ideals herself about blind loyalty. I am not sure where Simone will take Diana next, but I can’t way to see.

Wow I expected this to be good, but man was this good! Batwoman is a character we have been waiting for an explanation behind for three years, and while we don’t get her origin story here, I have to say I am a fan already. She doesn’t exactly fit the Bat-family mold. Her father knows that she is Batwoman (Could her stepmother be the original Batwoman?!) She has a military background, apparently has no problem with guns, and she is as pale as can be. And that is what I like about her! She is not a cookie-cutter character or a Barbara Gordon stand-in anymore. A lot of this has to do with Rucka, but Williams as well. His art is breathtaking (and weird) and you can’t help but marvel at the detail he puts into it. Everything from the panels to the stuff in Kate’s room matters. And the villain, Alice, is surprisingly freaky. As for the Question back-up, it was okay. I have never been a fan of Hamner’s art but I like some of the changes he made to Renee. As a gay man, I have to say that it is AWESOME that DC is having two Lesbian characters headline Detective Comics, but it is even more AWESOME that their debut is on the fortieth anniversary of the Stonewall riots. We have come a long way since 1969.

The Continuity Blog
Blog at WordPress.com.