This book was just as beautifully drawn and written as  I remembered it being. I have been a huge fan of the Freedom Fighters since Palmiotti and Gray did their first miniseries with them. I am sad they aren’t around anymore because we could really use these characters during this awful period in US history. DC if you are reading this I would love to write a Freedom Fighters book for you! Anyways, in this issue the team mourns the loss of Firebrand while the President tells Uncle Sam and Miss America he is sadly going to have to cut any government funding to the superhero team. I love the statement Uncle Sam makes about Superman can’t just stand for the American Way in the modern world he stands for the whole human race. Who knew Palmiotti and Gray would get me to respect this character so much.

This is sadly the final issue of this short lived book that I loved! In this issue the team disbands after the government cuts their funding. We see Black Condor bust a meth lab (why did Travis Moore draw all the people in the lab as being in their underwear? Is that normal in Meth labs?) and the team go on one last adventure which at the end of the government takes the Human Bomb into custody. This is left on a cliffhanger. Was this ever resolved somewhere?

Let me start this off by saying I am pretty upset this book is ending in May. DC never gave it a chance – I blame Flashpoint but whatever. This was an awesome issue as the Freedom Fighters finally come face-to-face with the Jester! Amazing action, story, and art has made this book one of – if not the best – book DC has put out since it started. I sure hope Firebrand isn’t really dead but it was great to see the return of Uncle Sam! Kick his ass Sam!

Palmiotti and Gray flesh out the back story of the Jester – making him far more interesting then the character ever was in the Golden Age and also introduce a crop of new villains like the disgusting Funerella who’s kisses kill people by having their flesh rot or something like that. In other words, this is still definitely the best new book of the year THAT EVERYONE SHOULD BE READING. It has conspiracy theory, intrigue, tons of action, and characterization. It is everything you could want in a comic. 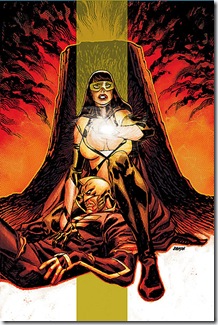 Damn this is definitely my favorite new series of the year! Second issue in and I was excited with every turn of the page. The renegades are cool elemental villains (although the one called Fire Horse doesn’t really make any historical sense since horses came from the old world) and the Arcadians are an intriguing concept. I liked the spotlight on Black Condor and Uncle Sam – who fought bravely even without their team. This book is patriotic in a in a non-blind way and brings me back to the patriotism I had as a kid.

Palmiotti and Gray’s Uncle Sam and the Freedom Fighters mini from 2006 with Daniel Acuna is a book i read again and again. I loved Acuna’s artwork and the way that the writing team made me feel so patriotic – but in a liberal America could be so much better then it is kinda way. The second mini was okay although I wasn’t a huge fan of the artwork but I could not wait for this ongoing to start and it finally has arrived! They really started things off with a bang – there is no set up we are brought straight into the action as the team fights on multiple fronts and is brought into a civil-war era mystery. This couldn’t have been any better! In one issue I think this may be one of my favorite books DC is putting out if not THE favorite. Pick this up people!!! 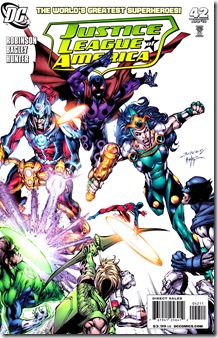 Robinson’s Justice League run continues to impress me. I am liking the dynamic of the new team and Bagley’s art. These villains aren’t rather interesting but we shall see what comes of them. Are Black Canary and Ray Palmer now members again? They are just there and this is never explained which is kinda annoying. It looks like Red Tornado is still a member although not functional but I think it makes perfect sense for Cyborg to try to help him in the way that he is. Still wish Hal wasn’t on the team but whatever it is just great to have a good JLA comic again!