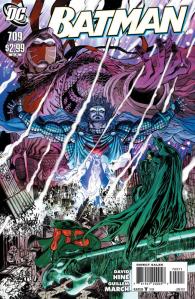 In this issue we learn that Dick let a boy he was jealous of get beat up back in his trapeze days. Dick acts so guilty about it but he was just a kid…what was he going to do? He hadn’t been trained by Bruce yet. Azrael realizes that he is being duped by Ra’s Al Ghul and the day is saved. I liked this comic although it was a little too convenient that the guy ended up bringing up “his friend Dick from childhood” to Batman. 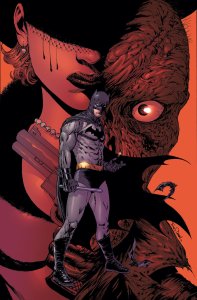 I often forget that it is Dick and not Bruce in these comics sometimes. But Daniel did a good job of reminding us of this when he has Dick just standing around as Batman near reporters. Bruce would never do that. Meanwhile Dick and Selena try to convince Katrina Falcone aka Catgirl to leave Gotham and Two-Face is looking for his missing coin.  Daniel is really mining continuity for his run on Batman and I love it. Steve Scott was an excellent substitute for Daniel’s art too. The issue ends with a surprise return character. 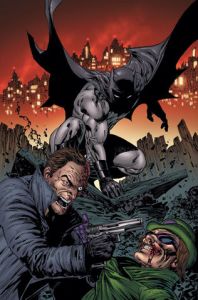 This was another fun issue of Batman. Yes sometimes things can be both dark and fun. Daniel has had a way of balancing that in his run. I love that he mines Batman’s history and his supporting cast. Here we get Riddler’s Daughter, Catgirl, Riddler, and Two-Face plus the Falcones and Gilda Dent. I am not sure I understand why Gilda is with Mario Falcone but I am sure that will be cleared up in the next issue or something. 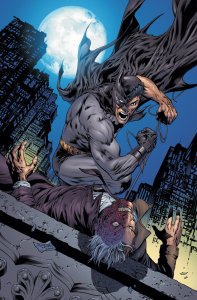 You can tell Daniel is wrapping up his run now. Catgirl leaves Gotham, I think the Riddler just killed his own daughter, and Two-Face killed Mario Falcone. Lots of death in this issue. So why would the Riddler shoot his daughter to “restore” himself? 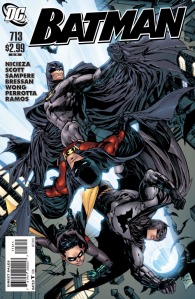 Here it is the final issue of a series that began in 1940! I hate when they renumber things and hope Batman goes back to its original numbering some day. Why is Cassandra Cain not in the splash page that shows the Batfamily! I mean come on! It shows the Huntress. Cassandra is way closer to Batman than the Huntress ever was! What is it with writers in this period and ignoring the greatest of all Batgirls. It ends up just being a a sweet story about how Dick teaches Damnian an important lesson. But that is so underwhelming for a finale of a comic book this important in history that it is just sad. Plus no Cassandra Cain so I obviously hated this.