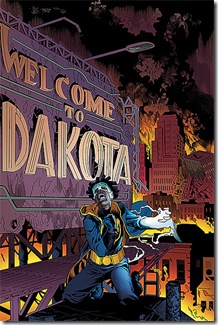 Static returns to Dakota after a virus hits the city hard. We are introduced to the Hawkins family and I wish there would have been more narration or something because I don’t know much about Static’s history with these characters or Dakota in general and it was hard to follow at parts. It was good to see Wonder Girl acting confident as a leader but sometimes it was a little much, like Henderson was beating a dead horse with it. Bombshell was right when she said that they shouldn’t talk about it anymore. Speaking of Bombshell, I am starting to really like her. Bennet’s art is still pretty annoying and Aquagirl and Blue Beetle both don’t look very hispanic in this issue. There definitely needs to be less use of first names as well, I mean what is this Meltzer’s Teen Titans. Henderson isn’t a bad writer, but she needs to step her game a bit before I can say that her run has been a success. The Ravager back-up was pretty short and I don’t have much to say about it.

One thought on “Titans In Dakota”