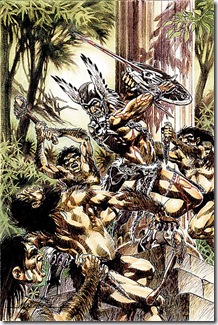 So the woman that Morgan was talking to turned out to be an old Atlantean Goddess I think I am not sure. But I did like the discussion of religion and gods in this issue and the recap of the Warlord’s origin. Grell’s art is inconsistent and I think it is the inker – whoever that was. This series needs to have recaps of previous issues if it wants to bring in new readers or sustain the few it already has. I have said it before and I will keep saying it. I also kind of wish that there had been some connection to Aquaman with all the Atlantian stuff but Grell didn’t go in that direction. It would have been nice.