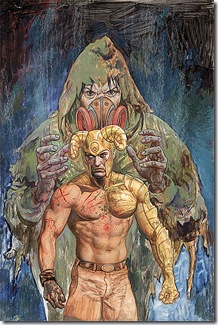 I can’t say that I actually like the character yet, but Giffen at least makes Magog less of a douche this issue. Although I think a true hero would have listened to the villains’ rant to gain information instead of just ignoring him. I guess that is what makes Magog different from others – he is so often focusing on his own thoughts. He is a very self-centered hero. I did like seeing that he is going to look into the nature of his powers and what exactly Magog is. The villain is rather interesting – I wish that we got to hear what he was saying and I like the idea of an underground land for the homeless.