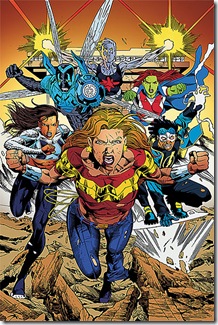 The title of this post is definitely true …since this is the second time in this book a monster has infiltrated the tower by posing as a furry friend. Anyways, this begins Henderson’s run on Teen Titans and so far, it is decent. I mean it is nothing totally special but I am going to give Henderson the benefit of the doubt because she is coming in right before a big crossover (blackest night) and this is the first comic she has ever written. She seems to have a strong understanding of the characters. Although I don’t like how Cassie is always portrayed as incompetent in leadership (but that’s something they have done for a while so it’s not Henderson’s fault). Bennett draws some weird faces in this issue. This book needs a new artist. I am not sure what was going on in the scene at Titans Compound…why would they be happy Beast Boy left them? Whatever Ravager saw in the back-up, really upset her. So much so that she is tearing up. It must be pretty bad what these guys are doing to upset Rose Wilson like that. Child slavery? I wonder.