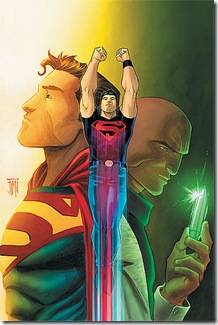 Superboy is back! I find it amusing that people around the blogospher are referring to Connor in their reviews as the “new superboy”. A character that has been around since 1994 is definitely not new. None-the-less, I am excited to have Johns write the adventures of Superboy in smallville. Johns sets up everything quite well in this issue and introduces concepts I am sure he will follow through on and even a future friend turned archenemy for Superboy. Manapul’s art is gorgeous as always. Henry’s art on the Legion back up was fine but I wish Manapul did that as well he is that good and it would be fun to see him draw the Legion again (even if this isn’t the same Legion). The only possible complaint I have is that I still don’t care for the whole “omg I have Lex’s genes, what if I become evil!” subplot and Johns continues it here. I have never bought the idea that Connor would even think that he could become like Lex just because of his genes. Anyways, Starman was as usual – hilarious – in the back up and I am looking forward to this series from here on out.