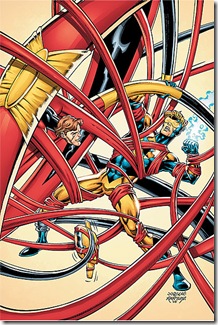 Dan Jurgens begins his run  on the character he created back in the day and so far, so good. I liked this issue. There were some thing that kind’ve annoyed me. Why are Booster and Goldstar being so sloppy about time travel? I mean haven’t they experienced enough to know that they can’t be just doing stupid things like posing for Da Vinci? I know Booster is not the smartest guy in the world but come on. And why does Booster tell Ralph so much information about his future with the Justice League? And why doesn’t Ralph recognize him later after this? I was expecting some kind of memory wipe but we get no such thing this issue. Maybe next issue? That being said, like I said I did enjoy this issue. It didn’t blow me away, but it is a good start to Jurgen’s run.